While logistics is certainly our passion, we never forget about our colleagues and their passions outside of workplace! We truely believe that each of us is an individuality and has their unique abilities. We appreciate that greatly and encourage them to work on these and promote those.

Our Sales Manager Bartosz is a person of many passions, a true vulcano of energy and one who cannot sit in one place for too long. He believes that it is super important to work out and keep healthy, fit lifestyle (and preaches that to his colleagues at work too!). He lives by what he believes, working out every single day during his crossfit sessions. His dream was to be able to compete in crossfit competitions both in Poland and outside of it. For him we developed our “We encourage dreams” program and thank to our support he is able to fulfill his goals!

We show there how our job looks like, also you can see everyday updates.

Today we are very proud to present to you the drifter that we are happy to be a sponsor of: Sebastian Matuszewski!

Sebastian is from our city Gdynia as well, and since 2012 his passion is drifting. His journey with that discipline started when he was 16, and despite his young age he was able to start in many competitions head in head with some of polish best known drifters! He says that what he likes the most about this sport is the diversity and power of the driting cars and lack of boundaries in designing a car of your dreams!

Just in his first year of competing he won general classification of Polish Cup – Drift Open and also STW Drift Challenge league, becoming the most promising debute of season 2013!

Thanks to Sebastian our team was also allowed to taste the chills of drifting and test their skills of safe driving under the eye of instructors! You can see us on that day in the below movie:

It was a very fun day and a huge dose of adrenaline for all of us!

In the name of our whole company we wish Sebastian all the success in the future! We also invite you to vistit his website: sebastianmatuszewski.pl – and of course to cheer for him during his new challenges!

Few days ago we received a very, very important letter with following certificate:

We are WCA Family member since 2014 and we are very proud of it! Read below to see why:

WCA (World Cargo Alliance) is an organization connecting all the best forwarding companies from around the world – it has more than 6000 members in 193 countries! To become a member, a company must fulfill a list of requirements, the most import of which are:

both of which IT-Logistics is!

Why is it important to be a WCA member?

Being an WCA member gives us many benefits – starting with know-how, ease payments between member companies up to financial guarantees. But the one feature that we use the most, is the giantic datebase with reliable contacts from all around the world!

Why is that good news for our Clients?

If a Client has a request that is hard to organize from just one side – like shipment to a place with no port access, or exotic country with no regular Shipping Line service etc. – all we have to do is to find a WCA member from the country and they will answer our questions and help us organize smooth delivery taking care of the cargo for us while it’s there.

This greately widens our possibilities and helps us with getting fast aid in case any problems are encountered. It’s like having an agent in every part of the world.

This of course also works the other way around – we are often asked by members from different parts of the world to help them take care of the cargo while it is in Poland and help them solve issues, especially those related to local laws that are different in every country.

Do you know, which port are the leaders when it comes to container operations? Let’s find out! Below we listed TOP 10 of the ports and some informations about each and every one of those.

Tianjin is the biggest port in northern China. It is known as the “gateway to Beijing”. Tianjin is a historic port andimportant commerce center since VI century. In 1860 it oficially became internationally recognized one. Today over 13 million TEU-s pass it’s gates on yearly basics.

Jebel Ali is the biggest port in the world that was entirly sonstructed by man. There were no natural conditions for it’s existance, so the whole area and all of the qauys were mound. The attached city was build just for the workers. It was built in the 70s. It is very close to Dubai – only 35 kilometers west. It is the biggest port in the Middle East, and it’s still growing. The plans of the port authorities are pretty impresive – beforyear 2023 they plan to be operating 55 million TEU every year!

Quingdao lays in the eastern China. It’s been one of the biggest players on chinese market for a while now with 16.6 million containers operated in 2014, but it’s authorities’ plans are very ambitious. They want to become a leader not only in China, but in whole Asia. Preliminary agreements with feeder operators and ports in South Korea have already been signed, but we will have to wait few more years to see if these prediction will become true. 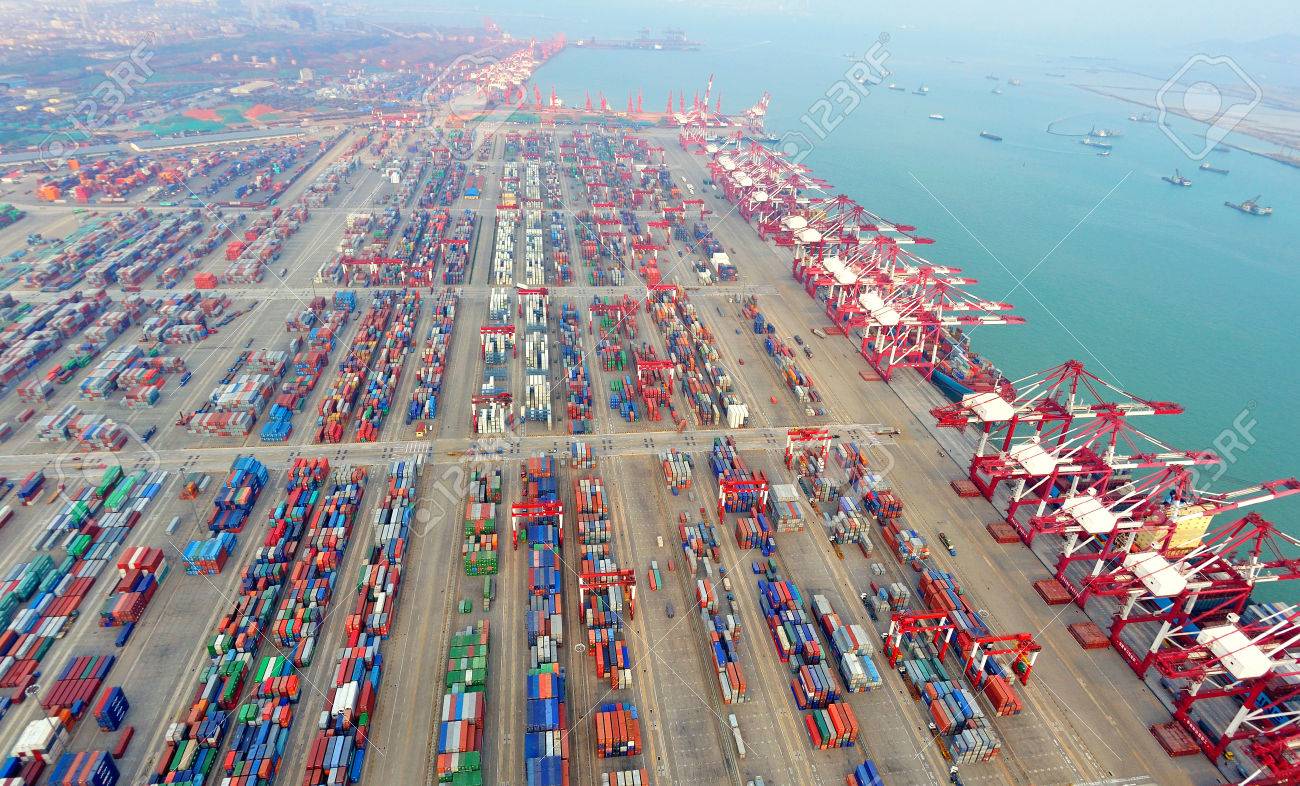 Yet another port in China. Despite it’s unfavorable location (the area around this southern port used to be very poor, then many factories were built around, living level was rised and now the factories are pushed further back into the country) is keeps getting more and more containers every year.

This port in South Korea has realle picturesque views. However it was not very developed until lat 90s. Since that time it grew to become the most important port in Korea. It lists steady growth and is ofetn used as a hub for cargo on it’s way to Japan.

Almost 5 million TEU throughput  in 2014 gave this Chinese port 5th location on this list. This is the only port that has listed two-digit growth during that hard time – as much as 12%! It broke another record in 2015 and it seems it will climbe higher and higher in the list in the coming years.

It’s been number one on this list many many times. Perfect natural conditions and large hindport made Hong Kong an icon of container transport. Even though it’s position is still pretty high, it has recently seen some decrease in the nuimber of TEU throughput. On the other hand, Hong Kong’s close neighbour, Shenzen, has seen small but stable increase of the number of containers that ngo through it’s gates. Port of Shenzen is in fact a collective name for a few big terminals in the Guandong province in China – as an examplem Shekou, Yantian and Chiwan and others in the Pearl River’s delta. It is a huge area that has 260 kilometers of shoreline – huge potential for future growth.

Singapore is the main hub for the whole south-east Asia region. It started it’s commercial activity at the beginning of XIX century. IN 2014 it celebrated 500 million-th TEU operated throughout it’s history!

Shanghai has been number 1 since 2009. In 2014 it broke the world record in the number of containers operated during 1 year – 35 million!

Shanghai wasn’t particulary significant port up until the beginning of XX century when it became the biggest port of East Asia. The new terminal artficially built on the open sea – Yangshan – allowed it to take the lead in the region. It is strategically located right in the middle of the longest, eastern shore of China and therfore has an amazingly huge hindport.